Could JayZ and Beyonce‘s trip have anything to do with the possibilities of new policies regarding the US trade embargo against Cuba? In recent weeks, the interest of a change in U.S. policy towards Cuba has been showing up in some of the most important media outlets in the United States.

One of the key points in this widening discussion is to find a clear and just solution to the case of the Cuban 5, prisoners held in the United States for 15 years. 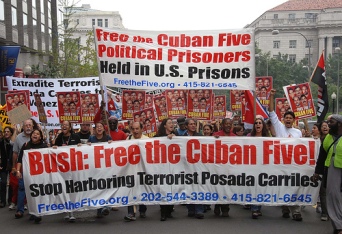 The Cuban 5 are five Cuban nationals, Gerardo Hernandez, Ramón Labañino, Fernando Gonzalez, Antonio Guerrero and René Gonzalez, who, in September 1998, were accused of conspiring to commit espionage and arrested by Miami FBI agents.

The US government never confirmed that any real acts of espionage had been carried out, since no classified documents had been confiscated from the Five. The men have since stated that their actual mission in the United States was monitoring the activities of the groups and organizations, dissidents and ex-patriots of Cuban after the revolution, responsible for terrorist activities against Cuba. After the triumph of the Cuban revolution in 1959, Cuba had been the victim of more terrorist attacks than any other country in the world, killing 3,478 and injuring 2,099. The vastly majority of those attacks originated in southern Florida, by groups tolerated and partly financed by the US government.

After their arrest, the Five were immediately placed in solitary confinement, for the 17 months of pretrial custody.

Despite vigorous objections raised by the Five’s defense, the case was tried in Miami, Florida, a community with a long history of hostility toward the Cuban government, which prevented them from receiving a fair trial.

Their six month trial became the longest  in United States history and its resulting  four life plus 77 year sentence for each of the five defendants made them the first people ever to be sentenced to life imprisonment for espionage in a United States case, in which there were no secret documents was ever obtained.

The Five were  imprisoned in five separate maximum security prisons spread across the US without the possibility of communication with each other.

Cuba is the only country in the world that Americans are restricted from visiting. If you can get a visa, the US government allows you to go anywhere else in the world, even places like Syria, Iran or North Korea. For this reason there are questions brewing over the legality of the trip. Did the Carter’s visit Cuba as unofficial envoys of the President?  In his recently released rap song Open Letter,  JayZ  kicks back a response to the negative press of his visit to the tropical country, with the lyrics,  “…boy from the hood but got White House clearance”.  But the White House immediately denied any sponsorship for the visit to Cuba.